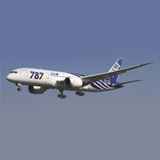 Sescoi’s high-speed 3D CAD Viewer WorkXPlore 3D has been selected by All Nippon Airways Co., Ltd. (ANA) to distribute and share design information for the maintenance of the Boeing 787 Dreamliner in Japan.
WorkXPlore 3D can read in data from a wide variety of CAD systems and makes it easy and economical for organizations and supply chains to collaborate and share design data.
ANA carried out benchmark trials on the STEP format supplied by Boeing, checking and verifying real data before making its decision. It found that WorkXPlore 3D was intuitive and fast to operate, and that its lightweight format was ideally suited to its PC network. The company also stated that Sescoi’s support network was well placed to provide assistance to its operations, and that the software represented excellent value for money.
ANA consulted Boeing to obtain its approval for the adoption of WorkXPlore 3D and plans to expand the use of the software to other Japanese airports served by the 787.
Bruno Marko, CEO of Sescoi, commented, “We are delighted that ANA has chosen WorkXPlore 3D for its Japanese maintenance operations, and that it will be associated with the prestigious Boeing 787 Dreamliner.”